Train fares will go up on average by 3.4% next year, train companies have confirmed.

The average overall increase covers all national rail fares with effect from 2 January 2018 and is below the regulated fares increase of 3.6%, which was July’s RPI measure.

People can find the new fares and buy tickets online and at ticket offices from today (5 December).

Over 97% of money from fares goes back into improving and running the railway, underpinning the rail industry's long-term plan to work together to change and improve services for customers, the economy, communities and people who work in rail.

In the next 18 months alone, this plan will see services in many parts of the country transformed with more trains, better services and improved stations. This includes Crossrail, Thameslink, Edinburgh-Glasgow, Great Western, Waterloo and the South West, and upgrades in the Midlands and the North.

Investment in rail is supported by a transformation in rail finances over the last 20 years from a £2bn deficit in 1997-98, footed by the taxpayer, to a £200m surplus.

Paul Plummer, chief executive of the Rail Delivery Group which brings together train companies and Network Rail to enable a better railway, said:

“Government controls increases to almost half of fares, including season tickets, with the rest heavily influenced by the payments train companies make to government. Alongside investment from the public and private sectors, money from fares is underpinning the partnership railway’s long-term plan to change and improve. Working together, our plan will secure £85bn of additional economic benefits while enabling further investment and improved journeys for customers, better connections to boost local communities and a bright future for our employees."

Rail companies are working together to deliver more than £50billion of improvements, including private sector investment of £11.6billion on 5,700 new train carriages by 2021.

To find out more about the work to upgrade Britain's railway go to www.britainrunsonrail.co.uk.

More about your rail fare

Working together, the partnership railway of the public and private sectors has published a long-term plan, called In Partnership for Britain’s Prosperity, to change and improve Britain’s railway. The plan will secure almost £85bn of additional economic benefits to the country, while enabling further investment and improvement, and contains four commitments which will see rail companies: strengthen our economic contribution to the country; improve customers’ satisfaction; boost the communities we serve; and, create more and better jobs in rail. 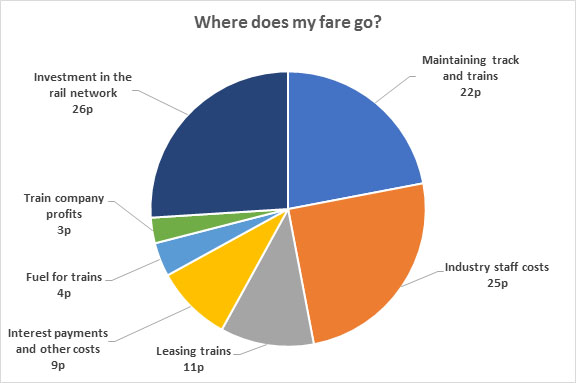