“For females young or old that are reading this, I would highly recommend a career as a train driver.” 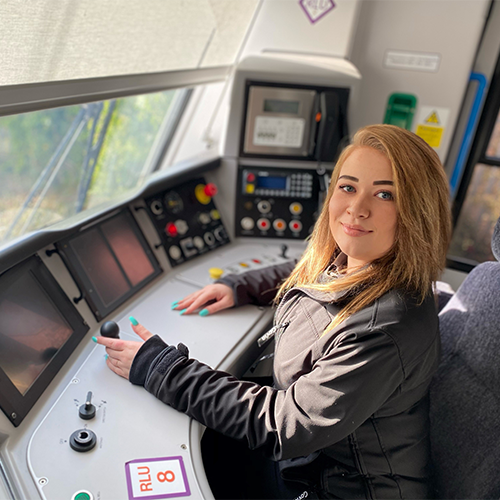 Beau Hawkins, 26, joined the railway seven and a half years ago and has recently qualified as a driver for Great Northern. After leaving school following her GCSE’s, she worked in several office and retail jobs before starting her railway career in 2013 at 19 years old. Over the next six years Beau worked in various roles and covered pretty much every station between Stevenage and Finsbury Park.

“It was a slightly quieter day when I saw the job advert for a trainee driver”, Beau said, before applying on a whim. “The first step of training is learning all the driving rules, which I would say is the hardest bit. There’s a huge rule book and you have to learn it off by heart for the tests. It covers just about any situation you could be faced with on the railway and the rules you need to follow – it’s really important and takes around three months to complete.”

“After the rules, things get a bit more practical and you learn how the trains operate in addition to learning different routes across the network. I’ve been driving solo since December and I absolutely love it. The perfect time to drive at the moment is when the sun is just about to set, it puts everything in this golden light and it’s beautiful to watch. I get to see it every day, I’m very lucky – it’s my office view!”

Although Beau says she has a great work life balance being a train driver, she can struggle to see her friends as they all work on the railway too. “Because I joined at a young age, I’ve built up a friendship group through my job. It’s great being able to share the same experiences but we hardly get to see each other because we all work shifts!”

“For females young or old that are reading this, I would highly recommend a career as a train driver. You can apply when you’re 20, but you can’t qualify until you reach 21. For those leaving school or college – consider joining the railway family. It’s a great place to be!”