“I haven’t been treated any differently just because I’m a woman – I was the only female in my training class but that didn’t bother me. I’d love more women to join us, so what are you waiting for?” 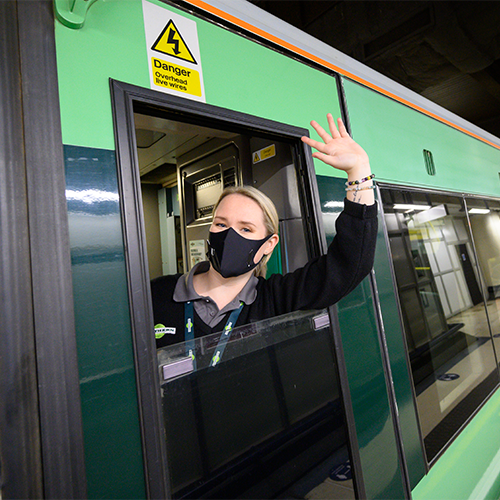 “There’s a lot of training involved in becoming a driver – you don’t just get in the driver’s seat on day one”, says Paige Lunn, one of GTR’s newly qualified female train drivers.

Paige’s initial application was in January 2017 and she started driving with an instructor in July 2019. Despite a few delays and changes to training due to the pandemic, we’re pleased to say that as of August 2020, Paige is officially a qualified train driver for Southern!

Before joining the railway, Paige mainly worked in retail; at the time of her application, she was actually working at Madame Tussauds, which while fun, wasn’t what Paige was looking for from a career. “I’d seen various campaigns calling on women to sign up and become train drivers, so I thought – why not! My dad was a driver and my grandad was also in the industry, so the railway is in my blood.”

Paige, 29, worked for London Underground for a short while, which helped her take the first steps in railway – but driving was the ultimate goal.

“For me, I quite like the fact that I’m my own boss. Yes, I have a manager and a team to check in with but most of the time you are managing yourself. I have a responsibility every day to get people from A to B and in that respect, I like that I’m making a difference.

“This will be the first winter where I’ll be driving completely on my own. It’s a bit scary as there’s a lot more to take into consideration – especially wet leaves which are a nightmare for drivers! Being up front in the driver’s cab is a real privilege. Some mornings are very special, when it’s a bit misty and the world seems a little bit more magical. Or when you get to witness a stunning sunrise – it makes you stop and appreciate nature.

“I was in my mid-twenties when I applied to be a driver. It’s something you can go into at any point in your life and I’d recommend it to anyone, it’s a fantastic industry to be a part of. I haven’t been treated any differently just because I’m a woman – I was the only female in my training class but that didn’t bother me. I’d love more women to join us, so what are you waiting for?”