“It doesn’t matter what gender you are or what background you come from, if you have the will and determination to become a train driver, there really is nothing stopping you." 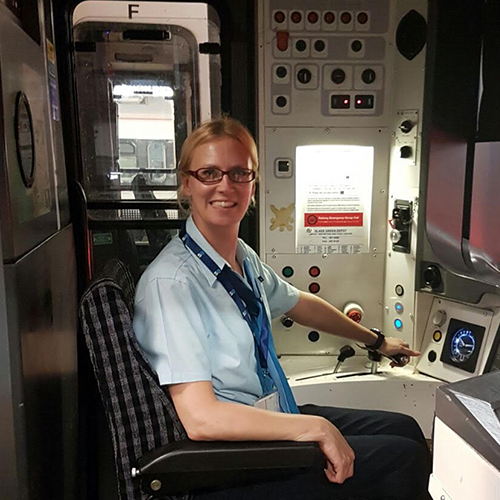 Kelly-Joe, who has been working at Southeastern as a train driver since 2016, has been involved in the campaign from the outset, acting as a lead spokesperson for the female train driving community. In an interview with the BBC Kelly-Joe said there "isn't anything stopping a woman from becoming a train driver… I think it's a society perception that train driving is seen as a male profession… I love the job, I work with fantastic people, I've never been treated differently because I'm a woman.”

Kelly-Joe’s passion and sense of pride for her role as a train driver has played an important part in promoting a role in rail among women, most notably on BBC Radio 4’s Woman’s Hour where she shared her first-hand experience of being a female driver and why more women should consider the role.

Kelly-Joe has also spent a number of hours attending Recruitment Open Days specifically aimed at women, helping answer any questions and concerns women have around the rail industry.

“There is a perception in society that train driving and engineering is a male-specific role, but this couldn’t be further from reality”, Kelly-Joe said. “There are no barriers for women who want to become train drivers but we must encourage more women to consider this. It doesn’t matter what gender you are or what background you come from, if you have the will and determination to become a train driver, there really is nothing stopping you.”

“I feel proud that I can contribute towards helping people during this challenging time. Of course for key workers but also for people who need and rely on public transport for shopping, hospital appointments etc. Anything I can do to help people, I am happy to do so.  I have always felt privileged to work within the railway and especially for Southeastern and this has been reinforced during these harrowing times by the way they have strived to make things safe for passengers and also their staff. We have all come together, across the whole network, whether it be cleaners, drivers, platform staff etc to keep people on the move and to do this safely.”