Stations play a critical part in the customer journey serving as the ‘shop window’ for the railway, but they can also create a lasting impression on a place for passengers.

Train operators and Network Rail have worked in partnership to deliver substantial improvements to well over 200 stations across the network in the last 10 years. These schemes have varied in size and scope, from major projects like London Bridge station, to smaller but equally important projects at regional stations with much lower footfalls.

However, the rail industry is not delivering these projects on its own. Increasingly we are seeing a diverse range of stakeholders that want to play an active role in the planning and delivery of improvements both within and surrounding our rail stations. This reflects how the benefits of station investment can be much wider than simply delivering transport related outcomes for the railway, such as increased passenger footfall or improved customer experience.  There are often much wider social, economic, or environmental benefits that can be delivered, or catalysed, by investing in stations.

In order to quantify and develop a richer understanding of these benefits the RDG Station Strategy Group and Network Rail jointly commissioned consultants Steer to conduct research into the Value of Station Investment.  We selected four case study stations, all varying in geography, market, and passenger footfall, that have recently received significant investment. The stations selected were:

Steer created a Social Value Framework, based on the Public Services (Social Value) Act 2012 which categorises the benefits that a public authority should look to deliver within their area. 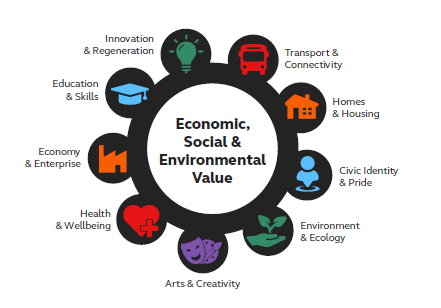 Before and after analysis of each station has provided compelling evidence on the wide-ranging benefits of station investment. For example, the improvements at Nottingham supported a transition to low and no carbon transport modes, through increased pedestrianisation, improved links to the local tram and bus network, and a 44% increase in cycling in the local area. Similarly in the case of Chelmsford, investment acted as a catalyst for a 350% increase in the annual number of new developments in the area close to the station. This included the station square redevelopment which enabled the new City Park West development to take place producing over 500 new homes, extensive commercial space and creating 500 new jobs just by the railway station.

At Strood, the station improvements supported an 13.6% increase in service sector (e.g. finance, education and health) jobs in the nearby area.  This increase was around two and a half times bigger than across the Medway area as a whole.

At Burnley Manchester Road station, which previously was burdened with inadequate facilities and poor connectivity, the station investment has transformed the local area. Planning data has shown that two years prior to the delivery of the improvements there were only three new developments within a one-mile radius of the station, but as shown in the chart below, in the years since the investment was completed this has risen markedly to almost 80 annual projects, underpinning once again that stations can be real placemakers in the communities and economies they serve. 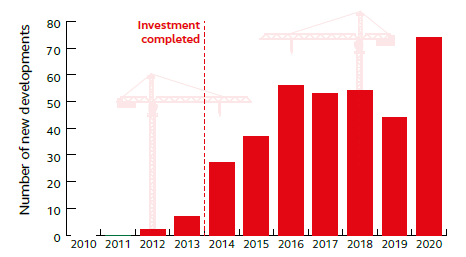 Crucially, all the stations analysed in this research featured involvement from non-rail funders, whether they be local councils or Local Enterprise Partnerships (LEPs). While each project varied in nature, we wanted to understand what makes a successful project, and how we in the rail industry can improve our processes to remove the perception sometimes applied that our industry is challenging to deal with.

The Covid-19 pandemic has only increased the need for the railway to work in partnership with more public and private sector stakeholders to restore growth and deliver further station improvements. The profound economic impact of the pandemic will certainly make funding infrastructure projects more challenging, especially while uncertainty remains over how people travel and use their towns and cities.

That said, if anything the pandemic has accelerated the need to unlock the benefits that stations can deliver. The increased focus on the environment is leading more people to think about how we decarbonise our towns and cities by encouraging more people to leave their cars at home. Equally, well planned station regeneration can act as a catalyst for economic growth and can create new enterprise units, jobs and housing, ultimately helping more people get back on their feet.

Our research shows that station improvements don’t just deliver for railway customers, they are an effective mechanism for delivering the objectives of non-rail parties too. The time is now, the railway is open for business and ready to create new partnerships to improve our towns and cities.